ne of the largest development plans in South Florida history — the American Dream Miami mega-mall, theme park and hotel, plus an adjacent office hub and residential community — is in its final stretch of approvals in Miami-Dade County.

What’s now 511 vacant acres in unincorporated northwest Miami-Dade, two miles south of the Broward County border, would be unrecognizable, a mini-city off of Interstate 75. The proposed mall would dwarf the malls that exist in America today and would add some twists: a submarine ride, indoor ski slope, water park, theme park, sports complex, outdoor fishing and theaters.

American Dream Miami, proposed at 3.5 million square feet of retail space, would be larger than Aventura Mall and Sunrise’s Sawgrass Mills, two of Florida’s largest. It would even surpass the size of America’s largest mall now, the Mall of America, in Minnesota.

American Dream Miami is proposed on 174 acres in the vacant triangle between I-75 and the Florida Turnpike’s Homestead Extension. The 6.2 million-square-foot project includes 2.7 million square feet of entertainment and common space, plus the shopping. In addition, a 2,000-bed hotel would be built. 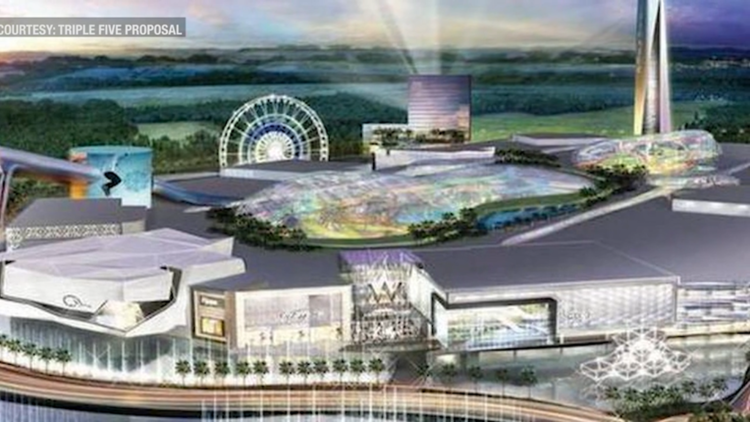 Graham Companies proposes to develop 337 acres just south of it into a 3 million square foot business park, with 1 million square feet of retail space and 2,000 residential apartments. That growth would slowly take place over 20 years, representatives have said.

As the gigantic proposed tourist attractions have wound their way through approvals over the past several years, Broward County officials have kept close watch. Broward leaders, particularly in Miramar, fear the new tourist attraction could clog roads in the southwest part of the county.

Also watching closely are other malls in the region, including Sawgrass Mills in Sunrise. Attorney Jeffrey Bercow, with the South Florida Taxpayer Alliance, said the mall owners he represents want to ensure American Dream “plays on a level playing field and follows the same rules and regulations that other malls have followed in the past.” 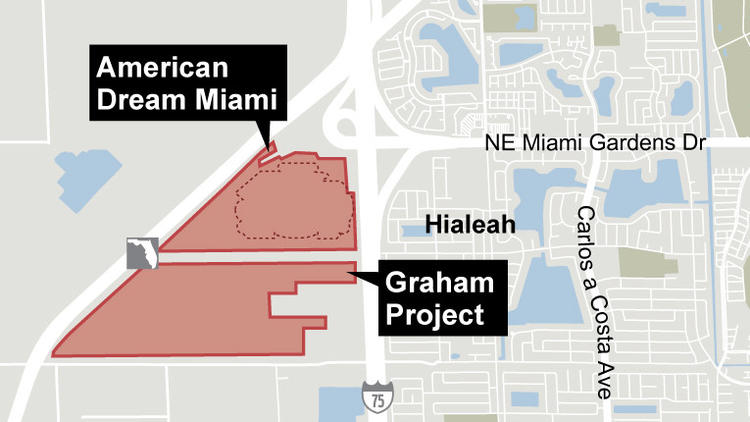 Two large developments are making their way to Miami-Dade County, just miles from Broward county. American Dream Miami amusment park, mall and resort is slated to be the largest of its kind in the country. The Graham Project will include 2,000 apartments and a 3 million-square-foot business park. (SOURCE: South Florida Regional Planning Council, maps4news)

Two large developments are making their way to Miami-Dade County, just miles from Broward county. American Dream Miami amusment park, mall and resort is slated to be the largest of its kind in the country. The Graham Project will include 2,000 apartments and a 3 million-square-foot business park.

Though American Dream hasn’t requested public funds or financing, Bercow said he suspects they will, and asked Miami-Dade officials to make sure that doesn’t happen.

Development officials in Miami-Dade County gave both projects — the American Dream Mall and adjacent office-residential park — a push forward Tuesday, at a meeting of the Development Impact Committee. After a vote on May 7 at the county’s Planning Advisory Board, final votes are scheduled at the Miami-Dade County Commission on May 17.

This article was written by Brittany Wallman, contact reporter at The Sun Sentinel.

Hialeah is hot. Key Biscayne is not. Here’s where Miami property values stand in 2019